It has been a wild ride for the electric-car maker.

From our perspective here at Empire Elite Trader, Tesla’s recent activity can give us some valuable insights into the current market environment… as well as trading in general.

Remember, as we like to say… Investors buy stocks, not companies. And if any stock proves our point, Tesla is right now.

In October, the company released its third-quarter earnings – reporting a decent earnings per share (“EPS”) number that beat analyst expectations and announcing success in getting its China factory up and running. Shares spiked after the release… and many investors felt that with Tesla’s stock price so high, the company would no longer have issues with financing.

Remember, stocks are just pieces of paper. On rare occasion, a company directly influences its stock’s movement with a bankruptcy, a buyout, a dividend, etc. But the rest of the time, the enthusiasm (or despair) of the buyers and sellers determines the share price.

In the case of Tesla, what has happened since October is that buyers have been much more aggressive than sellers.

Some of this buying has been from enthusiasm as the “good enough” earnings reports, increased confidence in the company’s balance sheet, and the scarcity value of “pure plays” on the electric vehicle (“EV”) theme.

Some of this buying has been despair, as the large number of short sellers (30 million shares were sold short in October, compared with 25 million today) have scrambled to cover their shorts. We’ve talked before about the human body and the psyche’s overreaction to pain, and this community is suffering from a lot of pain.

And now, all this wild price action leaves many investors wondering what to do with Tesla from here.

First, the easy answer from our perspective: Now isn’t the time to sell the stock short. Maybe yesterday was the top in the stock, and it’ll get cut in half in the next few weeks… but Newton’s First Law of Motion works just as well for stocks as it does in physics – a body (or stock) in motion stays in motion.

Many current shareholders likely own TSLA with a cost basis below $400 – where the stock traded for most of 2019. The vast majority likely own it at much lower prices – probably between $200 and $300 per share.

One strategy to consider here would be selling shares that are equal to twice the original invested capital and then letting the rest of the position ride. For example, if an investor had allocated $10,000 to buy Tesla with the stock at $250 per share (40 shares), he would have a total holding of $35,480 now based on yesterday’s close.

Tesla’s stock is not going to zero anytime soon, so the worst-case scenario is that our investor has more than doubled his money in less than a year. If the stock moves higher, he maybe wouldn’t make as much… but he will still benefit and has locked in some solid profits already.

Remember that a big part of trading is putting yourself in the right position (mentally and financially) to make the right decision.

In our example, this also means that if our investor really believes in the Tesla story and the stock does get cut in half, he can take part of his booked winnings and buy it back.

But what about taxes?

It’s a valid point, but with stocks as volatile as Tesla, an investor would hate to be in a position where he saved himself 20% on his taxes but lost 50% of his capital. Besides, he can still go long on the part that remains.

Also remember one of our favorite quotes, as it also applies to the markets: “History doesn’t repeat, but it often rhymes.”

Many investors and pundits are saying that they have never seen anything like the price action in the Tesla’s stock.

We have, though… Think back to the dot-com bubble, which ran from the mid-1990s through the peak in March 2000 and then subsequently crashed the market.

The analogy we would make here is that “Internet 1.0” reminds us of the current situation for electric vehicles (“EVs”) and self-driving, autonomous vehicles (“AVs”).

In 1995, the Internet existed with all of the technology necessary to power it having already been invented. It was only a matter of time and development for its full promise to play out in the economy.

In the beginning, though, few stocks were really “pure plays,” and the economic reality wasn’t there yet. These stocks had massive runs higher as a result of their scarcity value. They also traded at extreme valuations relative to their current economic earnings, given the early stages of the Internet at that point.

Does that sound familiar to anyone?

We think that AVs and EVs will be as transformative for the global economy as the Internet (or the internal combustion engine, for that matter) was in the ’90s… And we believe that where we are right now is the equivalent of 1997 or 1998 in that progress.

By that time in the late ’90s, we knew the Internet was for real… and a few stocks were absolutely flying. One of the lead horsemen of Internet 1.0 (and indeed, the Internet today!) was e-commerce giant Amazon (AMZN)…

The company’s stock went ballistic in the first week of December 1998… and in the next month, shares skyrocketed from around $30 to an intraday high of almost $100. The stock quickly backed off from those levels, but would go on to test (and break) them a couple more times before heading lower into the burst of the Internet bubble. Take a look… 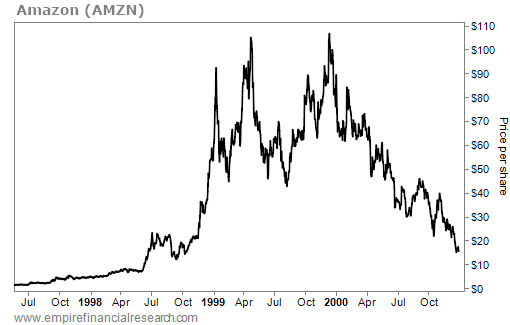 Does the massive run-up sound familiar? We don’t think this is exactly what will happen with Tesla’s stock, but we sure can see the rhyming here.

The AV and EV revolution is setting up to be very similar to the Internet’s rise. Today is looking like 1998 with some tremendous returns ahead of us. Here in the beginning of this tipping point toward that revolution, we will see some incredible volatility… and investors who trade wisely and position themselves accordingly will benefit greatly from it.